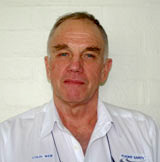 Colin is CEO of the Flight Safety Group of companies in Australia, South Africa and New Zealand. Current operations include aviation external auditing and accident investigation, helideck inspection and friction testing, training and expert witness involvement in all aspects of the aviation industry.

Colin has 54 years’ experience in the aviation industry including 16 years as a military pilot serving in the South African Air Force, nine years of which was on the fighter line involved in the Angolan conflict, operating in an air-to-ground role. This was followed by flying corporate aircraft in a military role as part of the South African Air Force VIP squadron. During that period, Colin was also the leader of a military intelligence section involved in sensitive aerial photographic operations.

Colin's involvement in civilian corporate flying spanned 15 years; for the final ten years, he was employed by the Anglo Alpha group of Companies, flying the Gulfstream Commander 900 series aircraft.

Colin was the owner and Chief Pilot of a corporate Charter Company for seven years and has logged 7500 hours on 35 different aircraft types ranging from the Lear 35 to turbo-prop and multi-engine piston. He currently retains an Australian Commercial Pilots licence and various African licences.

This flying background enabled him to set up a successful aviation consultancy business, involving a broad spectrum of aviation consultancy work and the production of 150 Flight Operations and related manuals. Projects included AOC license applications, Air Service violation hearings and start-up airline processes - he was involved in the successful Air Service license application, start-up phase and granting of the AOC for the second National carrier airline in South Africa. He was appointed as the Director of Regulatory Compliance and served on the Board.

Colin has been involved in flight safety auditing for the past 15 years. He was approved as an auditor for the Billiton Group and was a member of the Ansett Airlines' specialised "Regulatory Compliance and Auditing Department" prior to starting Flight Safety Pty Ltd. Colin was a designated BHPBilliton aviation adviser based in Melbourne, Australia from 2002 until 2004 before starting his own business.

Colin has served on the South African Civil Aviation Authority's 'Regulatory Review Committee’ and has acted in a consultative and advisory capacity to many large corporate entities. Colin is a certified International ISO Lead Auditor and has served clients globally, including Australasia, Indonesia, Malaysia, India, Iran, Canada, Africa, UK, Europe, Malta and the Middle East.